Living with iPhone 5 – hands on review 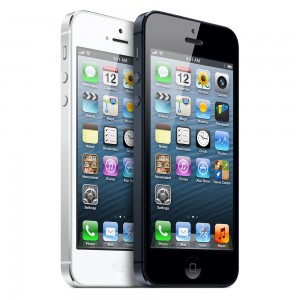 So, the new Apple iPhone 5. It is thinner, lighter and faster than the other iPhones but is it a huge leap forward or a step to keep up with the competition?

I’ve been living with an iPhone 5 as my primary device, keeping iPhone 4 nearby so that I can keep reminding myself of the differences.

Needless to say, the iPhone 5 was the most anticipated Apple handset launch since the iPhone 4. The 4S, like the 3GS before it, offered an incremental upgrade to its non-S tagged brethren. With the fifth-gen iPhone arriving when most iPhone 4 users’ 24-month contract comes up for renewal it was tempting for me to follow my now traditional upgrade as I have done from iPhone 3G to iPhone 4.

The thing is, there is now plenty of admirable competition out there in the smartphone world and many of my buddies have gone over to the Samsung Galaxy S III – that’s not even mentioning the HTC One X, Nokia Lumia 920 or even the Sony Xperia T.

I will hold my hands up and admit to being distinctly underwhelmed by how the iPhone 5 felt in my hand. Yes, it’s incredibly light and at 112g, it’s 20% less hefty than the iPhone 4S, 16% less of a chunkster the Samsung Galaxy S III and 14% lighter than the HTC One X – great, it’s the lightest iPhone ever but it also feels the cheapest iPhone ever when compared to my iPhone 4.

When I bought the iPhone 4 I loved how it felt like a piece of expensive audio equipment whereas the 5, to me, felt a bit… well… plastic-y.

Before you put a hit out on me, I know that the chassis is comprised of an anodised aluminium shell with glass strips adorning the top and bottom of the rear side and it looks good on it. It just seems to lack that premium feel when first introduced to it.

I will admit to having gotten used to how it feels and it has, more-or-less won me over – but if I spend £500+ on a new mobile phone I expect that wow factor instantly, especially if I have had that from the previous two models I bought.

Apple has done well to create such a thin and light iPhone, don’t get me wrong. I just think that Apple should have kept that industrial feel to the iPhone and with it the feeling that the smartphone could take some knocks. I am expecting a heart-wrenching scene of shattered iPhone 5s to come soon.

The four-inch screen is obviously a sign that Apple has decided to follow the industry’s trend for bigger displays. This now puts the iPhone 5 at a full 123.8mm tall with its width remaining 58.6mm.

It is nice to have that extra screen real-estate and it’s not too big to have to strain when reaching those top apps – well, I had no difficulties. I guess it all depends on how big your hands and how long your fingers are.

You will notice that, due to the moving around of internal stuff when making the iPhone lighter, the headphone socket is now at the bottom. Having become used to having headphones running from the top of my iPhone I found that using chorded cans meant that the jack forced me to having to hold the phone differently. Not a deal-breaker but I was thankful that I generally use Bluetooth headphones.

On the subject of audio – I did notice that the iPhone’s speakers have been given a much needed tweak resulting in the sound being much richer and deeper. Expect to be bugged by iPhone 5 owners on the bus along with all the other nuisances that think we all want to hear their choice of music.

Staying at the bottom of the iPhone 5 there’s the matter of the new Lightening connector. It’s a nice bit of design as it is not only smaller; it isn’t fussy which way it’s plugged in. To be honest, I have not noticed any speed increase in transferring things over the new cable but, again, it is a nice bit of polish.

It still irks me, however, that the Lightning to 30-pin convertor costs £25! 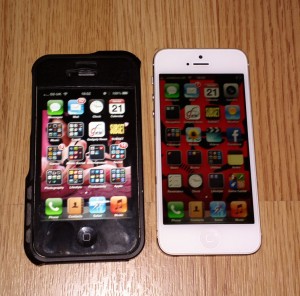 The new longer Retina display now boasts 326ppi and a resolution of 1136×640; it’s equally as bright and slightly richer in colour as the iPhone 4S and boasts room for a whole extra row of apps.

It is a feast for your eyes – Web pages are longer, movies are wider, the photo viewing area is bigger and Apple’s own, optimised apps make good use of the extra space.

iTunes and the App Store have also have been given a refresh and look nice and clean.

When moving back and forth between the iPhone 4 and 5 the difference in screen size is quite noticeable. At first it was the getting used to the longer iPhone 5 but, after a while, it was more of an issue getting back to the now stunted feel of the iPhone 4.

It’s still not as large as the displays on the Samsung Galaxy S III, HTC One X or Nokia Lumia 900 but I do find the iPhone 5’s a better choice for my specific needs. Besides, if you are looking to buy an iPad Mini then there is no need to have a much larger phone is there? 😉 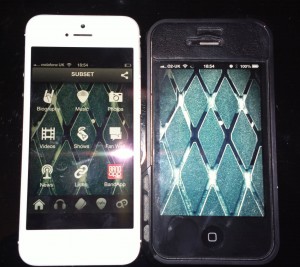 This is the area which struck me the most when I first started testing the iPhone 5.

I tested opening up the SUBSET app on both phones at the same time. I had a comfortable amount of time to snap the pic which shows the app open and ready on the 5 with the 4 still loading the icons.

This is mostly all down to the improved A6 processor now powering the visuals. I am really looking forward to when more apps and games come out that have been designed to use this new found speediness.

For a review about living with iOS 6 please click here

The rear iSight camera is still decent enough for most uses. You now get a bigger virtual camera capture button and video stabilisation seems to have improved.

Apple’s Camera app now detects faces and auto-focuses in video and allows you to capture stills while taking video. The video-compression algorithm has also improved which means a reduction in file-size without any noticeable reduction in quality. This makes for friendlier email attachments.

I have not seen any improvement in the low light capabilities of the iPhone 5 and there has been much ado about the purple flare (nothing to do with Prince) when shooting outdoors.

The major improvement is with the front camera, which has been upgraded to 720p video, making FaceTime and Skype chats much clearer. Still shots are captured at 1.2MP though.

The new Panorama mode is brilliant, as well as being intuitive and produces great results. I was amazed at how quickly the phone processes the shots and presents a lovely panoramic picture. See my very first iPhone panorama picture here.

As is now normal with iPhones, and most other smartphones, overnight charging is pretty much a given. I did find the battery lasts longer than my iPhone 4 but then my 4 is over 2 years old.

You will comfortably get a couple of films or plenty many hours of music listening out of the battery. 3G surfing will gnaw away at your cell and, I am guessing here, 4G web use will probably give it a thorough spanking but..

… I was unable to test 4G on the iPhone 5. EE will be the first UK operator to offer a 4G package and I am expecting the iPhone 5 to feel super quick with its A6 processor.

Wireless spec improvements for iPhone 5 include HSPA+, DC-HSDPA and dual-band N Wi-Fi. Using Vodafone’s standard 3G signal the phone seemed to react quicker than my iPhone 4 which is hooked up to O2.

Hallelujah! After years of not even taking the usual bundled earphones out of their wrapper it is so nice to have the EarPods. Granted, I feel that there are better earpleasers out there in the £25 price range (cost when purchased separately). When they come free with your iPhone 5 then they are pretty decent and a huge improvement all in one go.

After spending a couple of weeks with the iPhone 5 I find it hard to find anything wrong with it – except the price.

It looks good and performs exceedingly well. It is set to become Apple’s best-selling unit ever.

The competition hasn’t been standing still though and there were many Android and Windows Phone users during the iPhone 5 keynote Tweeting responses to each ‘new’ iPhone feature with “my phone already does that.”

The thing is, if I had a 4S and updated to iOS 6 there would be nothing making me want to upgrade my phone. If I was an Android user I could get a HTC One X or Galaxy S III and still have enough money left over to treat myself.

As it is, I am an iPhone 4 owner and, you know what? I’m going to see what the iPad Mini can do. If it doesn’t excite me, I might run the 4 for a bit longer and see what the 4G situation is like in a few months.