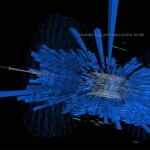 The Large Hadron Collider (LHC), better known as the Black Hole MakerÂ was switched on a couple hours ago, everyone survivedÂ and the first beam of protons made the 27kmÂ sprint smashing into an absorbing doopher called a collimator.

And this is the first pic from the thing 🙂

Apparently, and more to the point, worryingly,Â the LHC worked like a charm to the surprise of the present physicists.