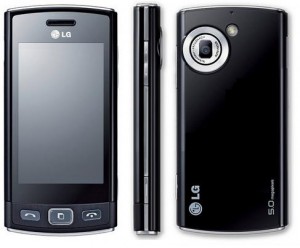 We all know that there’s a certain Apple touchscreen phone that sports a 5 megapixel camera but you might not want to fork out too much cash and tie yourself up with an 18 month or 2 year contract.

Here’s a touchscreen phone that also sports a 5MP snapper and can be yours for £90 on a Pay as You Go deal from Argos or direct from O2 who will even sling in a photo book worth £18.

The Viewty Snap GM360 is aimed mainly at the youth market but does look nice in its black suit with chrome trim. It sits nicely in your hand and comes in at a svelte 12mm thick.

On the face of the Viewty Snap you get hard buttons to answer and end calls and a central button which can take you straight to your favourite apps.

Most of what you’ll be doing is via the 3-inch resistive touchscreen.

Now, I know that I’ve been spoilt by the iPhone’s sweet screen, but I did find the GM360‘s screen usable for the most part but there were times where I had to give it a real good poke for it to notice me (ah – the story of my life). This was mainly the case when attempting to whiz off a text using the touchscreen keyboard. In portrait mode you enter text using an alphanumeric keyboard but you get the option of a full QWERTY pad when in landscape. It did catch me out as the Snap isn’t armed with an accelerometer. To get the QWERTY board you need to poke a button instead of turning the handset on its side.

On the plus side however, I was quite impressed by the Viewty Snap’s screen – it has a 400×240 pixel res and the colours are cheery and bright 🙂

The main home screen is actually broken into three separate screens which you flick left and right through.

The central screen is the home to your widgets. You can chose from some different screen skins to house your widgets – I opted for some modern shelving and plonked an analogue clock, the radio widget for the FM tuner and a shortcut to the BBC on them. There’s other widgets such as a calendar, music player, etc

Flick one way from that central screen and you get the ‘Livesquare’ panel which shows all your recent social activity. Incoming calls and messages from your contacts are all represented by a tiny avatar.

Scroll to the other side and this is where you can store eight of your main contacts which are pinned up as photos.

Head to the main menu and there’s two screens of icons. These lead you to Java apps and web browser shortcuts as well as social networking services such as Twitter, Facebook and Myspace.

You do need a little patience with that browser though as the Snap relies on Edge rather than 3G and Wi-Fi support – so no GPS here either which is almost a default these days. You do get Bluetooth support so not all is lost.

For me the camera is the GM360’s best ‘add-on‘. The 5 megapixel pic taker is packing autofocus and a single LED flash. OK – so a Xenon flash would be nicer and brighter but the LED manages to shed some light in those dark pub corners.

I was surprised to find that you can alter the camera’s exposure and white balance settings – LG have even thrown in a self-timer and macro mode for good measure.

After all that my expectations were raised when trying out the video capture mode…… It shoots jerky 320×240 resolution moving pictures at 15 frames per second.

Audio quality from the media player is pretty good and the bundled earphones are nothing special but I have used worse. Thankfully, and always worth bonus points from me, is that LG has endowed the Snap with the standard 3.5mm headphone jack so that you can use your chosen ear pleasers.

It also makes phone calls you know – and it’s darned fine at that. I could hear everything very clearly and the person on the other side could hear me well.

After playing with the LG Viewty Snap I realised that even though it wasn’t running all the apps and things that I’m used to the battery still needed a charge at the end of the day. No 3G or WiFi but I was still running the battery down (possibly waiting for that web browser).

I realise that this is a keenly priced handset and the push/pull email and its social smarts are sure to win people over – The thing is that I can’t help but think that there’s other phones that can do the same and perhaps add at least 3G into the mix.

Spec at a glance: