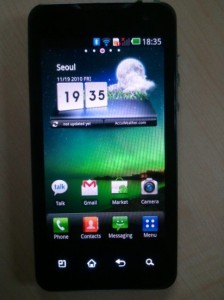 About a fortnight ago there was some leaked photo pics of LGâ€™s dual-core Android handset, codenamed â€œStarâ€.

Word is that it’s rocking a Tegra 2 processor courtesy of Nvidia, an 8MP camera with 1080p capabilities, a front facing camera and microSD and microUSB. And you can clearly see that it is equipped with an HDMI port!

Apparently this will be the first Tegra 2 packing handset and it runs a tweaked version of Froyo but I wouldn’t take this a sign that itâ€™s coming with Android 2.2. It could very well come packing Gingerbread when it arrives.

What everyone wants to know is how fast this LG blower is? Well, according to the mysterious keeper of the Star, it â€œoutclassesâ€ the Galaxy S series – Also, have a look at the pic containing a screenshot of benchmark scores in the gallery below.

From what I can see the main let down is a rather hesitant capacitive touchscreen. Hopefully they’ll swap that thing before it’s released at the start of 2011 😉

Check out the Star playing with an iPhone: