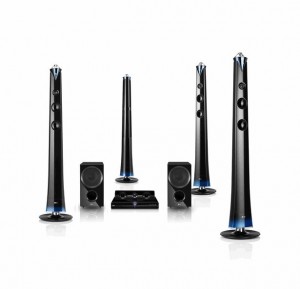 LG is still striding forth into the 3D world and there’s no sign of the Korean giant slowing down.

Since helping people understand what 3D TV can do to improve your home-based video experience LG have flashed their new wares ahead of its CES 2011 appearance.

The two complete 3D home cinema systems are to be officially showcased at the 2011 Consumer Electronics Show in Las Vegas next month but the LG 7.2 HX996TS and 5.1 HB906SB have shown themselves early for your festive enjoyment 🙂

The HX996TS is a 7.2 speaker system which uses LGâ€™s clever Vertical 3D Effect Channel tech. Those tall speakers actually send sound waves above your head which creates a virtual extra dimensional sound experience. The more familiar looking 5.1 HB906SB surround sound system is made up of four bookshelf satellite speakers and a central speaker and sub.

Launching alongside those two speaker systems, LG has unveiled a standalone 3D Blu-ray named the BD600 – this disc spinner features both cable and wireless internet connectivity options along with the added bonus of an internal 250GB hard drive.