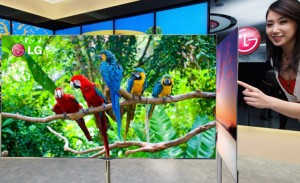 LG have just proudly unveiled its 55-inch OLED panel – get ready to catch your jaw!

That’s right, we’re only a matter of hours into 2012 and those clever Koreans are showing off this bonkers goggle box.

As you all are probably aware, OLED screens are known for kicking out bright and vibrant colours. Not only that, my gadgety faithful, but OLED tech allows the displays to be stupidy thin and this LG TV is no different.

You can see in one of the pictures here (the one with the lovely lady pointing) that this television is thin. 4mm thin to be precise.

LG states that this particular screen is even more vibrant because of its four-colour pixels, making its picture more natural and accurate than other OLEDs. Just like Sharp’s Quattron.

The exciting thing is that, until now, OLED TVs have either been tiny, have too short a lifespan or are way too expensive – or all of the above.

I am hoping that LG has so good news regarding those usual hurdles but, as yet, they’re keeping quiet until the telly is officially produced at CES.

It does look like LG are serious about bringing OLED in to your homes as it invested $226 million in mid-2010 to create a new production facility, tripling its OLED capacity. It can only be a matter of time until the production costs are levelled out as OLED screens can be printed onto razor-thin surfaces using a process similar to an inkjet printer. This, in theory, should make them cheaper to produce than today’s LCD and plasma screens.

I hope this all happens soon – how about you?