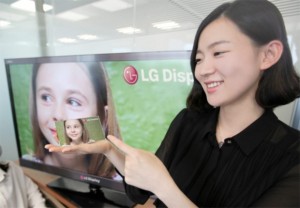 Apple’s Retina Display is generally used as a screen benchmark but LG is busy showing off their new 5-inch display which comfortably trounces the fruity phone maker’s current efforts. Could this appear fitted to the iPhone 5 though?

LG is rightfully proud of their new 5-inch screen as it dishes out a peeper-pleasing 1080p resolution and is promised to make itself known via the Korean company’s new smartphones.

The iPhone 4 and 4s have had their moment in the sun thanks to sporting a pixel density of 330ppi (pixels per inch), which endowed them with the the ‘retina‘ tag. This was a badge of honour bestowed upon displays which the human eye couldn’t make out individual pixels at normal usage range.

To the punter this means that images and videos looks so sharp that it’s bordering on perfection – the thing is, LG have made the Apple effort look rather pedestrian with their 440ppi bundle of joy.

LG has said the screen will be available towards the end of the year but hasn’t given away which phone it will be loaded in to.

What has got me a little giddy with nervous anticipation is that LG has already been rumoured to be providing parts for the next gene iPhone. Would it be wrong of me to think that the new iPhone could arrive equipped with a 1080p 440ppi display? Granted, LG would have to make a slightly smaller version if the word on the street is right about the iPhone 5 screen size.