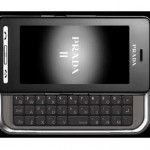 LG have now come out and said that there will be a follow up to their fashion fone link with Prada.

There has been the usual leaked pictures around the interweblogsphere and now the manufacturers have finally Â admitted defeat and confirmed that the Prada II is in the pipeline.

I’m hoping that other rumours are also true; such as the slidey-out QWERTY board – the text entry on the last one wasn’t fabulous to use.

Euro Prada fans get first dibs and then it will go across the pond to the States.