LG Prada 3.0 Being Fashioned for the Catwalk 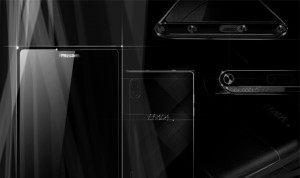 If you find yourself led by labels and like nothing better than hanging around in top fashion retail outlets then you may be interested to hear that LG is busy styling a new Prada phone, dubbed the Prada phone 3.0.

The LG Prada phone 3.0 will be available off-the-peg next year but LG has released a teaser of the painfully fashionable phone.

The 3.0 is following in the perfectly turned-out silhouette of the very first Prada phone which was released back in 2007. Mk 1 ticked all the right boxes for a fashion phone and found itself a place in the New York Museum of Modern Art. It even bet the iPhone in sporting a capacitive touchscreen. The second Prada phone fell behind as the Apple device brought a stack of apps to the party.

It appears that Prada phone 3.0 is following the black, minimalist approach of its forebears. I would expect some exquisite design touch such as leather/snake/crocodile-style accents on the back of the phone. Oh, the 3.0 features a large touchscreen on the front and a camera at the rear.

Yeah, check me out! Next stop CSI or NCIS for me I reckon! 😛

The minimalism does jog thought of Nokia’s well designed Lumia 800. I’d expect to find some trendy touches on the LG though – perhaps leather/snake skin/crocodile accents on the back.

LG is probably hoping that the Prada 3.0 will prove more appealing than the competent but slightly lacking is sales line-up of the Optimus 2X and Optimus 3D.

Would you panda for a Prada?