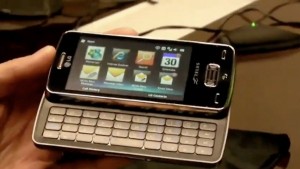 Not as swish as the HTC HD2 with its capacitive touchiness some might say but the IQ does hide something that may be of interest for those that like sharing pics and clips with friends.

The future of gadgets seems to be slapping in a projector: Cameras like the CoolPix S1000PJ and phones such as the Samsung Show and now the LG IQ

You may know the IQ by its previous codename: Monaco.

As I’ve mentioned already it doesn’t have that capacitive touchscreen but it does get a sliding landscape QWERTY keyboard, Snapdragon 1GHz processor, five megapixel camera and WVGA display – oh and that projector.

Just like the Nikon’s Coolpix the LG IQ’s pic slinger is not going to replace your guerilla cinema in a hurry but for Â£90 it’ll be a handy talking point – yeah, you’ve got a touchscreen but have you a projector in your pocket? Nah, thought not.

Saying that, with the projector added it does make it a bit of a chubster.

The LG IQ touches down with Telus in my birthplace: Canada. No word yet if it’ll make it to the UK but it’s hitting AT&T on December 7th. Why not have a goosey at the vid below 🙂