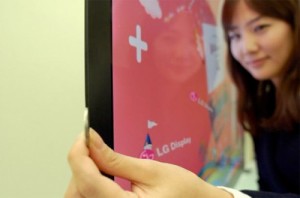 LG have another boast – and it came in this announcement – albeit in Korean.

It apparently is all about this: the “world’s thinnest” tv!

This LCD looks like an OLED, and at just 2.6mm thick, is thinner than the tiny Sony XEL-1.

And whilst Sony’s telly is thin you’ll be able to see the picture on the LG’s screen from the comfort of your sofa because this prototype is packing 42 inches – as well as it being LED-backlit with a 120Hz processor. It also worth noting that this neat package also weighs a mere 4 kgs.

LG will have a special section at their CES 2010 booth that will feature Extreme Slim LCD products.