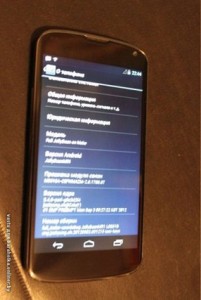 The LG Nexus has been rumoured for a while. Some have said that they’ve actually had a good ol’ fondle with the device where others have stated that the LG Nexus is, by all accounts, just a reworked Optimus G.

I’m starting to wonder if it’s not a case of either/or, but rather and. It would make sense for Google to cast wider net for the next branded smartphone. There is much power to brand loyalty and if you have an affinity with Sammy or LG it would be nice to have the choice.

That aside, if these pictures are the real deal, it looks as though the Korean company’s crush for corners may be taking a break as this smartphone is rocking rounded edges breaking away from the design DNA of the Optimus range of Android handsets.

The only other thing I can tell from these spy snaps is that this device is running on Google Android Jelly Bean.

What do you think about this? Let me know here or on the GN Facebook page 🙂