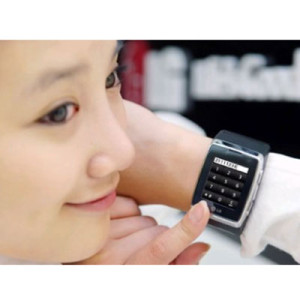 How could you forget that totally cool thing spotted at the CES.

The coolest thing is that LG has confirmed at the MWC that we’ll be getting it in the UK before the year is over!!!Â  🙂

It will initially be an Orange exclusive.

The LG Watch Phone (or GD910) is a full-blown 3G handset but wearable as a digital watch.

It has a touch screen interface and can manage the usual phone things such as sending texts, dialing and can even make video calls.