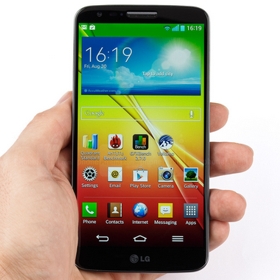 The LG G2 garnered many accolades last year and with the Samsung Galaxy S5 on the horizon it looks like LG are going to take the fight to Sammy – their main smartphone weapon will be called the G3.

The screen will also be slightly larger than the G2’s current 5.2-inch offering, measuring in at 5.5-inches, and the new G is expected to carry a 16MP camera with optical image stabilisation (OIS).

Past rumours have suggested that the LG G3 will be powered by LG’s own octa-core Odin processor, consisting of four 2.2GHz Cortex-A15 cores and another four 1.7GHz Cortex-A7 cores for less demanding tasks.

The LG G3 is reportedly marked down for a May 17th release date, shortening the LG upgrade cycle. This could well suggest that it doesn’t want the Galaxy S5 to have so much of a head start this time around.

The G3 will probably buddy up with the G Pro 2 which is also waiting in the wings.

This LG phablet will be rocking a gigantic 5.9-inch QHD display and a spec list which appears to be mostly wishes rather than confirmed.

There’s a fair chance that all will be revealed at Mobile World Congress in Barcelona next month.