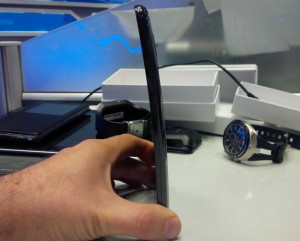 Proving that bendy is trendy the LG G Flex has poked its curved face in to the lens of a video camera.

Following the news of the Samsung Galaxy Round, the LG G Flex has been revealed both in photos and video.

The anticipated curved handset was shown off on Telefe Noticias by journalist Federico Ini, who also posted a photo of the device to Twitter.

The video shows off the device that’s similar in design style to the LG G2 that was recently released, including those volume controls on the rear of the handset.

The video, which is in Spanish, goes on to make some comparisons to the recently-announced Samsung Galaxy Round, which also offers a curved display.

However, you can see that, unlike the Samsung Galaxy Round, the G Flex curves up at each end, like a banana phone.

It’s designed to fit your face better and if you rock it towards you the screen will turn on, so you can see your notifications.

According to the TV show, the screen is 6-inches, and the device has buttons on the back, like LG’s G2. Also on the back is said to be a 13-megapixel snapper.

There’s no official word from LG on the G Flex just yet, but with the handset getting into the hands of a journalist, a formal announcement can’t be too far off.