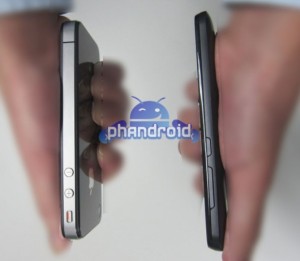 Not content in having what promises to be a super-speedy Optimus 2X – someone has slipped out some pics of LG’s super-slim Android known only as LG B.

The leaked snaps shows that the LG B is even skinnier than the ‘world’s thinnest smart phone’ – Apple’s iPhone 4.

According to what the blurry-focused one has spilled to Phandroid – LG B has a 4-inch LCD screen which, and if you check the pic out below, is actually brighter than the Samsung Galaxy S which is pretty darned good already! The LG B is sat in the middle – yeah, thought you would’ve worked that out. So, could the B stand for Bright or Blinding?

I would expect the LG B to be running Froyo, like the Optimus 2X with an update to Gingerbread in the not too distant future.