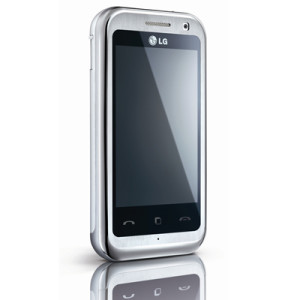 I know what you’re thinking – “Surly that’s a re-badged iPhone?”.

Nope, although it does look strangely familiar, it is in fact the LG Arena.

Apparently it’s packing GSM/UMTS/HSDPA/3G connectivity, along with a high-res 3-inch 800×480 display (dunno if resistive or capacitive) and it is to have someÂ  kinda mobile TV.

It’s also said to have a 5 megapixel camera, with a â€œ3D interfaceâ€ as well as a front-facing camera too.

“The direct, intuitive and dynamic S-Class UI will be unlike anything that has appeared on a mobile phone before. With rich 3D graphics, touch sensitivity and exciting multimedia capabilities, it will truly make ARENA a fully loaded multimedia phone”, said Dr. Skott Ahn, president and CEO of LG.

The Arena apparently measures just 11.5mm thick, which makes it a touch slimmer than the iPhone and it could be out in Europe as soon as next month, more specifically, on T-Mobile Germany for starters.

The reported specs of the LG Arena: