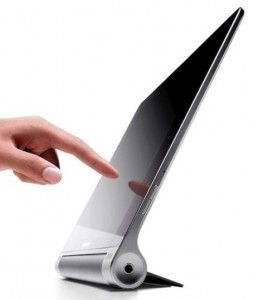 The new Lenovo 8-inch and 10-inch Yoga tablets have an slightly unusual form factor for a slate. Even stranger, they were announced by the company with Ashton Kutcher taking his new role in the company.

The Lenovo Yoga tablet is not the usual slab of tech that we generally associate with tablets. Even the very thin ones such as the Apple iPad Air are just flat rectangles of gadgety stuff.

The Yoga, however has a large bulge along one edge for grip. A similar idea to what we saw on Sony’s rolled-up paper design for their Tablet S.

That bulge also contains a aluminium kickstand, and capacity for the kind of batteries usually found in netbooks. This gives the Yoga Tablets a claimed battery life of up to 18 hours. Very nice.

There’s also a micro SD expansion slot, allowing up to 64 GB of additional storage, a micro USB port and Dolby DS1 for pleasing your ears.

Lenovo have also built an optional Bluetooth keyboard for the 10-in model that functions as a cover, it wakes up the tablet when it’s removed and puts the tablet to sleep when it’s attached. 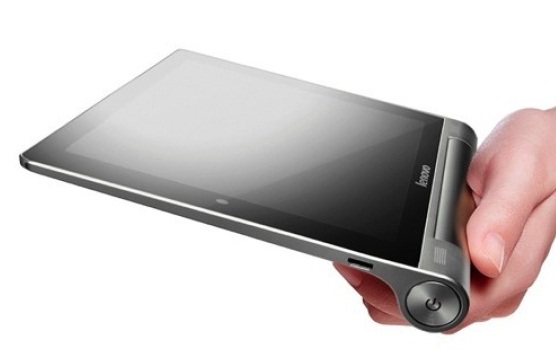 The tablets were presented along with the announcement that celebrity Tweeter and former Mr Demi Moore, Ashton Kutcher has joined Lenovo as a product engineer.

Jan Huckfeldt, VP marketing EMEA Lenovo said: “Aston Kutcher is a good example of our target market, which we call the millennials. These are the people who have multiple devices in their lives. We studied the behaviour of these users to design this product, and found that everyone needed a tablet stand at some point. We have taken considerable care to move the tablet’s centre of gravity so that it is now in the palm of the user. The Lenovo Yoga tablet’s battery life of 18 hours is unique in the market.”

Hmmm… a tenuous link to get a ‘celeb’ on-board methinks.

Check out the Lenovo livestream video below: