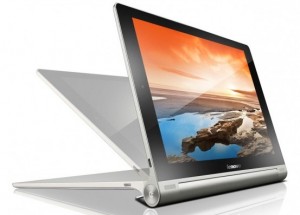 Lenovo appears to have been listening and is ready to reveal its new Yoga Tablet 10 HD+ tablet.

Whilst last year’s Lenovo Yoga Tablet 10 was applauded for its 3-in-one cleverness and incredible stamina thanks to the tubular battery – the screen and speed, however, was best left out of reviews.

I’m happy to report that the the Yoga Tablet 10 HD+ seems to have had a good going over in order to tweak those irksome irritations and rights those wrongs.

First off, the great thing is that they have kept that eye-catching design so that it stands out from the rectangular monotony that plagues this sector.

Besides, that roll below the screen is what hands the Yoga its flexible nature: grip it in ‘Hold’ mode or flip out the kickstand and use it in ‘Tilt’ or ‘Stand’ mode.

Lenovo have made the kickstand longer so that it now stands the tablet upright.

Under the hood you’ll now find a Snapdragon 400 running at 1.6GHz, and RAM has been doubled to 2GB.

The Yoga 10 HD+ gets an 8MP camera round the back too!

Is it perfect? Well, for that I’d need to get my hands on it for a review.