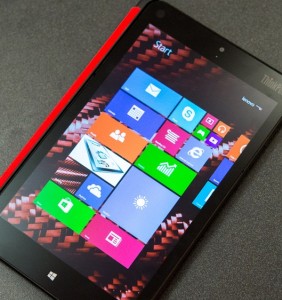 Lenovo certainly means business with the unveiling of their ThinkPad 8 tablet at CES 2014. The ThinkPad 8. is firmly geared towards workaholics, students, and worker bees on-the-go. The skinny Windows 8.1 slate ships loaded with Microsoft Office and offers ports for connecting to an external monitor, TV, or keyboard. Read on for more details.

That 1920×1080 resolution makes Lenovo’s new addition the first 8-inch Windows 8.1 tablet with a higher resolution than the standard 1280×800 that most OEMs, including Lenovo, generally load in to such devices. It’s not Retina Display territory but the screen will be sharp and colours bright.

While the performance and display specs are solid, Lenovo has opted to ditch its optional stylus support this time around. 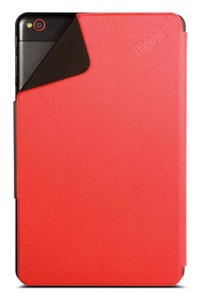 The optional Quickshot Cover is one of the more interesting options available for the ThinkPad 8. As with Apple’s iPad Smart Covers, it attaches magnetically at the side of the tablet and protects its screen.

The cover automatically wakes the device when it’s peeled back – nothing new to report there – but it also has a neat trick where you can fold back a corner to expose the 8-megapixel rear camera and automatically launch the built-in camera app.

Oh yeah, the cover also doubles as a stand used to prop the tablet up in a tent-like stylee.

Lenovo’s ThinkPad 8 weighs 0.92 pounds and is 8.8mm thick (think Nexus 7), so it’s substantial without being chunky or heavy thanks in part to its aluminium construction.

With options for 3G / LTE support as well as 32GB, 64GB, and 128GB storage Lenovo could well have one of the best 8-inch Windows 8.1 tablets curretnly available.

Priced to take on the iPad mini, the ThinkPad 8 will be available for $399 when its goes on sale in late January.