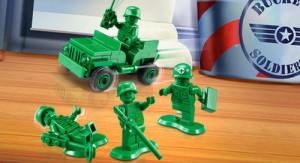 Even if you’ve somehow managed to avoid the computer generated animated flick you may have played with those cheap green plastic soldiers – if you happen to be a certain cousin of mine you probably also set fire to them at some point too!

Well, the genii at LEGO have only gone and released mini-fig versions of the little green GI’s!

They even come complete with removable stands. There’s even a 3″ long Jeep and a stretcher.

Go here and buy at least one pack now!