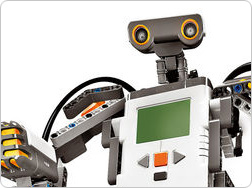 Lego has announced that there is to be an update to its rather fabby Lego Mindstorms set this year – a mere trio of years since the last version graced robot clubs around the world.

Well, there’s the Colour sensor that can be used to let the robot you build determine colours before acting on that information and the ability to control it via a PC or Mac with the accompanying software.

Bluetooth is still present and users will get the chance to build four new models from the 619 piece set; a new version of the robot – Alpha Rex, Robocator – a fierce looking crocodile, Shooter bot – a robot that shoots balls, and Colour sorter – yes a robot that sorts coloured balls.

There’s also the much-needed upgrade of 10 robot instructions from the software rather than 2 as in the previous model.

The only move that I’m not too sure of is that the new kit is focusing on getting 10-14 year olds rather than the 400,000 strong hardcore fanbase that it has already mustered.

The Mindstorms NXT 2.0 Lego set will be available later this year for Â£200.