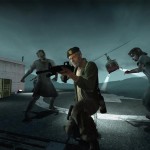 If you’re not familiar with the title let me tell you a little about it.

The ‘4’ in the name underlines that this is a 4 player First Person Shooter (FPS) (and not an homage to Prince’s whacky way of writing) and the ‘Dead’ bit is a nod to what will happen to you if you don’t work as a team.

Oh; and perhaps the fact that you’re fighting zombies!

The game comes from those great people, Valve (they gave you Counter-Strike and Half-Life), and is set in the immediate aftermath of the zombie apocalypse.

Thanks to “the AI Director” you can play the same level repeated times and it will be different each time you play â€“ Youâ€™re actually meant to keep coming back, charging through each zombie-infested level again and again, in the company of your buddies.

The Director tailors the frequency and ferocity of the zombie attacks to your performance, putting you in the middle of a fast-paced, but not too overwhelming shooty-shooty-kill-kill game!

Obviously the other aspect to the randomness is your 3 playing partners â€“ you know how it goes: One will go off on a killing spree leaving the rest behind.Â  We’ve all been there and/or been guilty of doing that 😉

Most games it’s ok and you generally can get away with it but this game reminds you to stay as 4.

But even then you could be handling the zombie horde as a group when suddenly a molotov is thrown, or a cannister explodes, and everything is engulfed in flames! You watch in horror as one of your team is caught by a lasso-tongued smoker zombie and dragged off to their doom and then….then……I sharn’t spoil it!

Here’s a quick look at those bad-guys:

If you like gaming, killing zombies and having your mates join in the funÂ you will want to click this link and try on the demo for size!

The game costs $44.99 through Steam and is available for pre-order now (you get access to the demo straight-away) and the full game is released on November 18th.