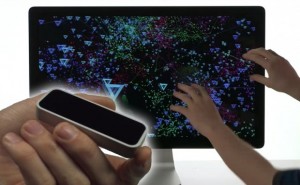 I was so gobsmacked by Leap last night all I could do was post the video on the GadgetyNews Facebook page. $70 for something 200 more accurate than Microsoft’s Xbox Kinect? Oh yes!

I still remember how excited we were when Kinect mesmerised us with its super smooth and highly accurate tracking when it released back in November of 2010.

Since then it has proved to be one of the fastest selling peripherals to date. It was a great day when the Kinect was confirmed to be heading to PCs!

The thing is, tech moves on. That’s why I have to blog about it every day!

Leap Motion is a US start-up that’s working on something incredibly clever: the Leap 3D sensor. It’s a tiny USB sensor with accompanying software that tie together to create a “three-dimensional interaction space” of about four cubic feet in front of your computer.

Basically, the area between you and your monitor suddenly becomes a control zone and one that’s “200 times” more sensitive than any similar motion-sensing tech currently available.

Where the Kinect is smart enough to pick out your general body shape the Leap sensor is accurate to within millimeters. This allows you to use tiny gestures which will be transferred into your PC.

“The goal is to fundamentally transform how people interact with computers,” says Leap Motion CEO Michael Buckwald. His company is aiming large – they’re looking to change computer navigation “in the same way that the mouse did, which means that the transformation affects everyone, both from the most basic use case all the way up to the most advanced use cases you can imagine for computing technology.”

Yup – that’s no small achievement and, looking at the video below, the tech appears up to the challenge.

What can make or break any new innovation is support. This is why the Leap Motion sensor will launch with the backing of some 20,000 developers, who’ll look to use the tech to their own imaginative ends.

“Think what would have happened if the mouse had been initially been released as a closed technology. The impact would have been a tiny, tiny percentage of what the impact was because it was an open system that anyone could develop for,” says Buckwald.

Are we ready to disguard the mouse in favour of some hand-sweeping Minority Report action? Can I get a “Hell yeah!”? 🙂

The Leap Motion is not currently available and won’t be till at least December of this year, with a price tag of $69.99.

See the Leap in action in the video below.