Latest is That New iPhone is iPhone 3GS 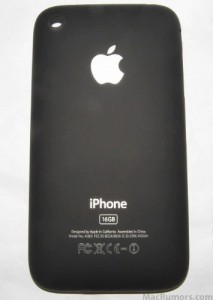 What happened to the Video or V3?

John isn’t sure what the S stands for but he does think he has a clue about is pretty much everything else that will pop out of Apple execs’ mouths at WWDC this week.

I expect Apple to announce updated iPhones with significantly faster processors, twice the RAM, and twice the storage. I expected prices to remain the same as the current lineup: $199/299 for 16/32 GB, respectively. The video camera is going to be a major selling point.

I believe this is true, and the new price will be $99. But since I expect the new top-of-the-line iPhone 3GS to start at $199, that means the $99 iPhone must be something else. I see two possibilities: (a) a new device, something that is to the iPhone what the iPod Mini was to the original iPod; or (b) the existing 8 GB iPhone 3G, unchanged but reduced in price.

And an iPhone nano might round out the three tiered line some day, but not tomorrow.

While I am convinced that “Marble” is a real design project at Apple, I no longer believe it is slated for Snow Leopard. A new visual appearance isn’t something Apple can spring on third-party developers at the last moment. If they plan to ship Snow Leopard soon – say, by the end of August – that just isn’t enough time to allow developers to update their software to look good under a new UI theme.

Oh, and as for the Apple tablet: Gruber seems to think it exists in some shape or form, but don’t expect any word about it today.

So – not really giving much away that you didn’t already know.