Lara Croft to be Immortalised by Derby Ring Road 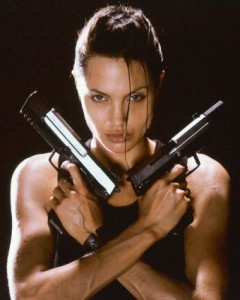 Derby council has taken the brave/lazy/dangerous step of asking the public for suggestions of what to call two stretches of their new Â£36.2 million ring road.

Now, the â€˜bestâ€™ (or most sensible/cleanest/least offensive) names have been shortlisted into 8 choices, one of which is Lara Croft Way – but there is a kind of logic at work with that.

You see – the shorts wearing, tight t-shirted professional Tomb Raider was ‘born’ thanks to Core Design, which was based in Derby.

Lara has gone on to become the star of the multi-million selling game and film franchises including having the lovely Angelina Jolie slip on that outfit.

Other names shortlisted include Mercian Way, Griffon Way and Merlin Way, with others being suggested in reference to local heroes like footballer Steve Bloomer.

Lucy Care of Derby Council said: “I hope that when people vote for their preferred names they think about which names people will enjoy using for many years to come, and which will help make Derby a more memorable place for visitors.”

Perhaps they should have thought about that before opening the decision up to the public?

Personally I’m hoping both Core and Lara get the recognition.