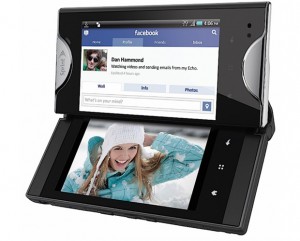 One of the hottest looks for tablets and laptops is for them to be rocking twin screens.

Toshiba Libretto, Acer Icona, Kno, V12 Canova and so on.

Well, the Kyocera Echo smart phone has full dual-touchscreens which possibly makes it the biggest breakthrough in Android handset design yet!

I’m not talking dual-screen like the Samsung Continuum – this is a real twins of pleasure deal!

The Echo has two 3.5-inch WVGA displays connected by a ‘pivot hinge’. The clever bit is that both screens can show different apps and/or screens, or work together as a 4.7-inch display – but that’s just for starters!

The Echo can be used in ‘simul-task mode‘ which is basically REAL multi-tasking. Simul-tasking is when the phone is running the likes of email and Web browsing at the same time – actually having two core processes running at once on the two screens. That’s a huge step towards real PC style multi-tasking instead of the background-running and fast-switching version we class as mobile multi-tasking.

The groovy stuff keeps going with the ‘optimised mode’ – When looking at image thumbnails on one screen, tap it and see the larger versions fill up the second display.

For you budding Video Jockeys – Kyocera will be preloading an app called VueQue. Watch a YouTube vid on one screen whilst browsing and setting up the next ones on the second screen.

Developers will get some help with converting their apps to use the dual-screens. Kyocera and its network partner Sprint are providing an SDK to help, but the Echo will need to sell well to persuade developers it’s worth the effort.

Other points to note – The Kyocera Echo will appear using Android 2.2 Froyo (even though 2.3 is out there and Gingerbread 2.4 has been rumoured) – I’m guessing that the Echo will get updated though. It’s also rocking a 5MP camera which has 720p HD video shooting smarts, packs a 1GHz Snapdragon processor and comes with 1GB of internal memory, plus an 8GB microSD card.

You even get a spare battery – is that a nod to the power leeching hunger of those twins?

I reckon that the Echo will come into its own with eBooks and gaming – but the bonus of having different things running on each screen could be the winner.Â  Facebook on one screen whilst using Twitter on the other?Â  Wollop!

The Kyocera Echo will only be available in the US for now – so, come on UK peoples – we want this phone over here too don’t we?