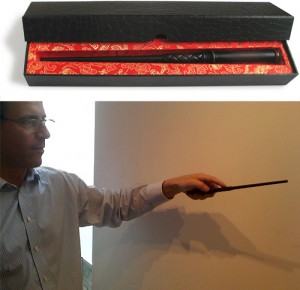 Last week I had the good fortune to join in Firebox’s show-and-tell preview of their Christmas line.

Apart from the fizzy vodka, which was rather nice, it was a real magic wand that remained in my mind as I left The Gallery on Charing Cross Road.

The Kymera wand is the product of Chris Barnardo of The Wand Company.

Although sporting a resemblance to something you will have seen thrashed about by Harry Potter, Gandalf and Paul Daniels it’s actually a universal remote.

Instead of trying to work through clever touchscreens and myriad of buttons all you have to do is wave your magic wand to make the channels change.  Ta-daaaaaaaa! 🙂

Flick the Kymera Magic Wand up or down in order to change the channel.  If you need the volume up or down you turn it in a clockwise motion.

It has a total of 13 â€œmagical functionsâ€ in order to perform actions on your TV.

In the demo the wand controlled an iPod dock and was able to flick through the iTunes library, select a track and control volume.  The remote light switch was controlled by more forceful flicking of the wand wrist.

The wand is battery powered and not powered by kind wishes and unicorn tears.

Firebox will be stocking it from around next month or you can pre-order one by slapping down a tenner at The Wand Company’s site via PayPal.

All together the wand will cost you Â£49.95 or about $83 and will appear for Christmas.