Kung-Fu Live Puts You in the Gaming Action 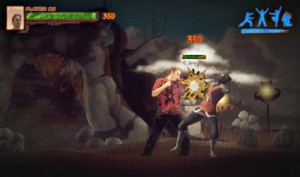 It all started when a group of young Finnish scientists invented Virtual Air Guitar which involved slipping on some orange gloves and standing in front of a camera.

Now, the Virtual Air Guitar Company designs and develops camera games where the player literally gets to be the hero of the game.

This means no avatar, no matter how cool looking, it’s all about YOU!

Thanks to their FreeMotion tech you get a full-body image of you in the gaming environment.

Kung Fu Live was there at Gadget Show Live and after watching a few games where people were playing as the gaming character…. I couldn’t resist any longer!

FreeMotion allows accurate real-time tracking of the entire human body as well as background removal using regular webcams. The software tracks the player’s poses and movements including data for all body parts such as hands, feet and the head. The player’s image is extracted from the background and transferred into the game world. The background removal works in home conditions without the need for a greenscreen – It can even remove your buddies that happen to be sat watching.

The game tracks pretty well (granted, having about 5 years from Lau Gar training meant I wasn’t as lightening fast or supple as I should be) and was only confused by the rare sight of sunlight streaming into the camera’s line of sight.

The game I was playing was a horizontal scrolling beat-em up and it only took a few seconds before I was punching and kicking into thin air whilst the gaming me was attempting to hit the bad guy. Unfortunately, the screen was over my right shoulder which meant the Kung-Fu mini me wasn’t looking where he was punching but looked as though he was waiting to be paparazzied 🙂

Thankfully, there is no photographic evidence of how sloppy my Yeun Tak is these days – I wouldn’t dare attempt a Ciun Tak for fear of ending up on my face!

I can’t wait to see how this develops.

I wouldn’t mind a go on that virtual air guitar now!

For more info go to VirtualAirGuitar/kungfu