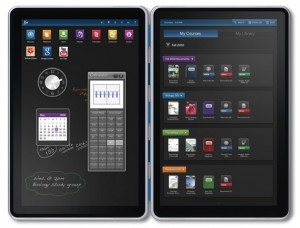 If Toshiba’s Libretto wasn’t enough to tempt you how about “the most powerful tablet anyone has ever made” (according to investor Marc Andreessen)?

The Kno has just had a $46m cash injection and talk of release by the end of the year!

The Kno purrs along using a Tegra 2 chip with 16GB of storage and the company’s CEO Osman Rashid claims it’ll cost under $1,000!

That seems a tad steep; especially as Toshiba’s Folio rocks the same chip and will cost Â£329 for the Wi-Fi only version ($508).

Kno wants to offer college textbooks through an app store, which will allow them to draw on the pages and take notes like a lot of the e-Readers do these days.

It looks good and I wouldn’t mind giving it a go but I reckon the price needs to drop for it to be taking seriously.