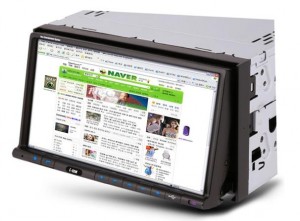 It’s time to outgeek those that think a GPS/DVD/CD/Mp3 player in the car is the height of in-car tech.

Granted, it will work better in its native home of Korea as they must have better wireless coverage than in the average British town – or even some British cities for that matter!

If we were better wi-fi equiped as a nation what could you expect from this little box of tricks?

As for trying to watch that amusing YouTube clip whilst navigating a UK ‘B’ road probably isn’t best attempted – still it’ll be safer than the Multi-Media Scooter!!!