KitKat hints heavily that Android 4.4 and Nexus 5 will land on Oct 28th 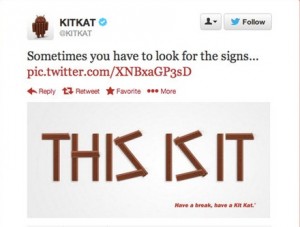 KitKat has been tweeting with reference to Android’s latest OS update and web-based sleuths have cracked the code which points to an October 28th release date.

@KitKat has been teasing with the release of their Android operating system’s namesake. The first clue was yesterday’s tweet of “Everybody dance now!”.

Not much to go on, you might think but budding Sherlocks out there figured out that the song referenced was ‘Gonna Make You Sweat (Everybody Dance Now)’ which was by a group called C+C Music Factory, but they were originally named The 28th Street Crew. Interesting factoid, yeah? But what has that go to do with anything?

Today KitKat tweeted: “Sometimes you have to look at the signs” with a picture of KitKats piled up to spell “This Is It”.

So, another musical clue. ‘This is it’ was the Michael Jackson song released on, you guessed it, October 28th.

OK, it looks as though the common factor is 28 here and with last year’s Nexus 4 reveal occurring on October 29th it all seems to fit.

Tomorrow, presuming there’s going to be another tweet, it could well be confirmed.

I, for one, am penciling in Monday, October 28th for the unveiling of Android 4.4 KitKat and The Nexus 5 smartphone.