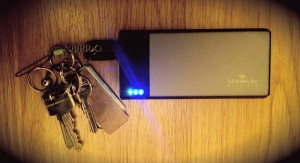 You can never have enough memory on your mobile device and how many times have you wanted to look at something on your USB stick but only have your phone with you? Do you need a card reader that can also share/backup your files and photos wirelessly and gives your mobile device a burst of power in an emergency? Believe it or not, the Kingston MobileLite Wireless could be the answer to all these questions.

On the face of it, the MobileLite Wireless Reader can do many things: It can boost your smartphone’s memory, is a portable card reader, enables your phone to access flash drives as well as doubling up as an emergency power source and a wireless hotspot for easy file sharing.

What do you get?

Well, it’s a no frills thing here. You get the MobileLite unit (duh!), a set of instructions, a microSD to SD adaptor and a USB to micro USB cable.

Granted, the packaging and bundle isn’t going to set you heart aflame, but you pretty much get everything you need.

After removing the MobileLite from its transport I was pleasantly surprised how sturdy it felt. The plastic casing felt quality and the matte black and gunmetal grey finish looked business-like and purposeful.

The MobileLite sports a micro-USB port on one side, which is used to charge it, and a full-size USB connector whilst, on the other end, you’ll find an SD card slot. On the face there are three status lights which tell you what is going on with the device, from left to right you have the battery light, the wireless light, and the internet light. With the battery light being able to change colour so you can see when it is below 50% and 25% charge. Below the lights is where the power button lives.

The MobileLite’s main function is to share files, photos, music and video from any SD / SDHC memory card to your phone or tablet over Wi-Fi. All you do is pop the memory card in the device turn it on and it generates its own Wi-Fi hotspot which you (and anyone else in range) can access via Kingston’s free app.

Not only that, as phones especially are rather power thirsty and prone to conking out just when you need them, it’s good to know that the MobileLite Wireless doubles up as a backup battery too.

There’s one more trick up the MobileLite’s sleeve. It can also be plugged directly into a desktop or laptop PC (or MAC) turning it into a traditional card reader. 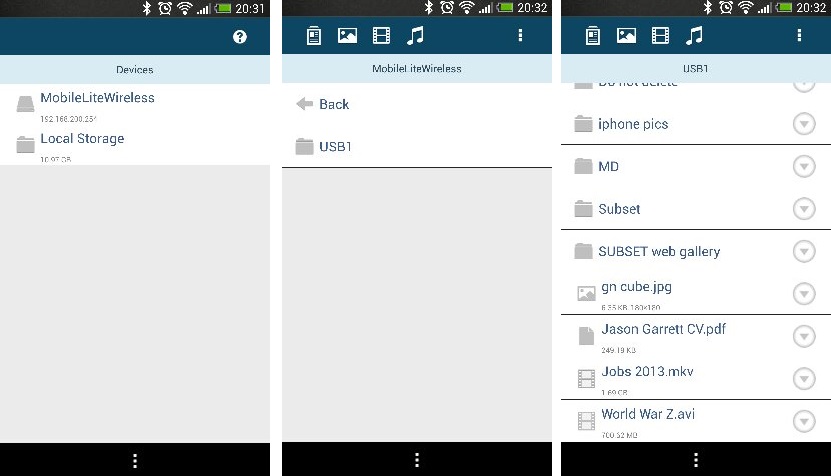 To begin using the MobileLite means downloading a program from your device’s respective app store. So, Google Play for Android devices and the Apple App store for your iOS based devices. It doesn’t look as though Windows Phone is currently supported.

Once the app is installed you will need to turn the MobileLite on then connect to the device using Wi-Fi just as you would to connect to any other Wi-Fi network. Once connected and running you can add your memory cards or USB drives and then the contents will automagically appear in the app window.

Kingston have been very clever too as the MobileLite can connect to another wireless network which means that you don’t have to sacrifice being able to get onto the internet whilst using it.

To use the device as a portable charger all you have to do is remove anything plugged in, switch the MobileLite off, and then shove in your device’s USB charging cable into the USB port. Press the power button shortly for a second or so and your phone gets some extra go-juice. Note, however, that in this mode you cannot use the device for storage sharing.

How did the Kingston MobileLite perform?

Kingston says that the MobileLite can handle up to three devices at the same time and it definetly could cope with an iPhone 4, HTC One and iPad Mini accessing it at the same time.

The device supports the following:

Streaming video from the MobileLite worked well and, as it loads video files in external players, the only problem that I could envisage is that your device doesn’t support the relevant codecs.

For audio files the MobileLite appears to use a built in player, so you don’t have to leave the app whilst listening. The player is fairly basic with standard controls for skipping tracks as well as a shuffle and repeat option. You can email, copy/move and delete tracks directly from the player should you want though.

JPG’s and TIFs can be viewed in the apps slideshow but it appears that it won’t play nice with RAW files. Up until this discovery I was thinking that it might also be a handy tool for photographers out in the field.

However, after having a play around it appears that you can copy the files to your mobile device where you can view RAW files in free apps such as RAWdroid. It’s also possible to send files and photos back to the MobileLite where they’re saved on to the SD card or USB stick.

The wireless signal from the MobileLite was good for around 10-15 metres which is more than enough as the device has obviously not been designed to be the central hub for a large business but more focused for personal and portable sharing..

The apps themselves are very clean, clear and easy to navigate. The icons at the top allow you to filter the file list to specific categories, such as videos or just audio files, which is a nice touch.

As for the emergency charging function, the MobileLite managed to boost my HTC One by about 25% which would be more than enough to rattle off a number of emails and phone calls.

When using the MobileLite as a traditional card reader (I don’t actually have an SD card reader in my desktop puter) it worked flawlessly. Just plug it into a spare USB socket and you’re set. Whilst using it like this it will also take the opportunity to recharge itself.

You know what? The Kingston MobileLite does exactly what it promises, without any fuss what so ever. The only ‘hardship’ is that you have to download the free companion app. Wow, there’s so many things that require that it’s hardly worth noting.

The lack of RAW support aside (sorry photographers) the fact that I can increase the storage on my phone to almost infinity (or at least the amount of flash drives and SD cards I have on me) is a big deal. When you see that the MobileLite Wireless costs between £34 and £44 online it’s a bargain when compared with the extra space between an 8GB iPhone 4S and a 16GB iPhone 5C costing you £120 and the jump from a 16GB to a 32GB iPhone 5S will hit you up to the tune of £80.

Also, the MobileLite will let you wirelessly share your holiday snaps with your family and make your video collection and tunes accessible to your mates down the pub.

It’s a true bonus to those of us that have lovely gadgets which don’t have expandable storage.