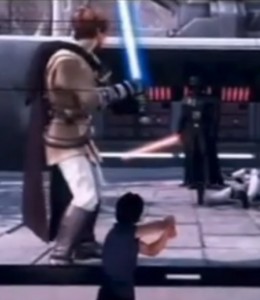 You know when I mentioned the Star Wars tie-in with the newly named Kinect (AKA Natal) controller?

Well just to show I don’t lie to you folks check out the video below!

Yup, there’s actual lightsaber swinging a-go-go as some dude takes on Darth Vader in the short, oh too short, clip.

I’m still trying to tell if this was merely a choreographed set-piece made to show the ‘potential’ control of the game and to avoid that notorious lag that the Natal appeared to have before.

Or am I just trying to protect those brittle dreams of my youth that I’ve carried with me thus far – the chance that I also could, one day, become a Jedi Master………