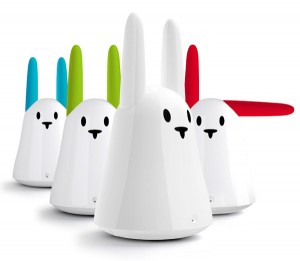 How do you feel about being poked by a rabbit? Well, Karotz has just joined Facebook!

You may think Karotz looks a little familiar – well, the cute little critter first landed as Nabaztag: a web connected desktop toy that hooks up with your Wi-Fi to read you the news, weather and so on from your RSS feeds as well relaying your emails or playing music. Now it has sent out a Facebook friend request.

The bunny gadget has an integrated microphone and you can speak to the rabbit, and then it will post what you say to Facebook for you.

The rabbot is also packing a camera inside and can take a picture of you to share on Facebook with your friends.

Your friends can also take control of Karotz and communicate with you by sending audio messages or even sending you a poke via an app.

“We are excited to launch the new Karotz smart rabbit which is compatible with Facebook, to allow people to interact both with their new companion and with their friends wherever they are,” said Fabien Bardinet, CEO of Violet. “Following the successful launch of Karotz in the US at CES this year, we are confident that it will also do very well in Europe as Karotz already has a strong fan base of people who like to keep in touch with their friends and family via social networking sites on a daily basis.?”

The charming little bunnybot will also read statuses or comments aloud to you from your Facebook profile. The long-eared device can also be made to notify you via e-mail when someone is in your home such as a child or a roommate – should they enter the room with the appropriate RFID tag on their keychain or backpack.

There are also a few other apps, like one which lets you use Karotz as a remote spycam, since it has a webcam built in.

Karotz, complete with Facebook features, is available in the UK now priced at £124.99.

There are iOS and Android apps to control it, as well as a Facebook app coming soon.