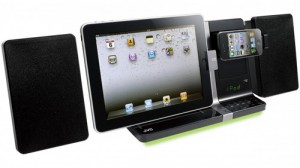 iPhone and iPad docks – YAAAaaaaawn! That’s the usual reaction isn’t it? They’re either extremely dull but capable slabs of tech or ridiculously overpriced design statements. The JVC UX–VJ3 is neither – it’s well priced and can dock a pair of iDevices.

You see, the JVC UX-VJ3 costs and extremely reasonable £130 and if you’re a bit sniffy about appearing cheap – whack in your iPad 2 and iPhone 4 and then everyone will be able to see that you’ve got the cash for tech and must be in the know 😉

This also means that you can store movies on your iPad and music on your iPhone and not have to sync both devices with the same content.

You get an AM/FM tuner, video/Hi-fi out as well as aux-out and a USB port that only connects to a PC – yup, even though the dock loves to connect with Apple portables it wont play nice with a Mac.

If you head for the VJ5 you get a choice of colour options (check the pic in the gallery below) and the ability to rip MP3s from a built-in CD drive.

The retro LED display shows the radio station as well as the time. Ok, so it seems that JVC have overlooked HDMI, DAB and Wi-Fi streaming but you get to dock a couple of iThingies at the same time for under £150.