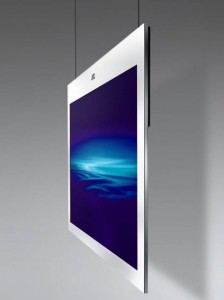 It’s all well and good that tele’s are getting thinner and larger but there’s only so much that your wall can take but JVC are taking this into account.

Their yet-to-be namedÂ lightweight goggle-boxÂ should be gracing theÂ up-and-coming CES as the company attempts to sell the idea of ceiling-mounted TVs.

And when a 32-inch TV weighs just 5kg, you can see the company’s point, especially when you use “almost-invisible” cabling for support.

I canÂ hear many a modernist apartment dweller sighing with anticipation.

And just because it’s light doesn’t mean it has lightweight specs.Â  It can quite happily display 1080p resolution from that 7mm thin screen and with an increase in LED backlighting, less mercury is used, boosting your green credentials.

More when it appears at CES and perhaps at that point we’ll get to know when/if it will appear in the UK shops and what kinda price we’ll be looking at.