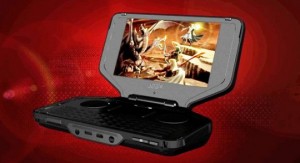 It’s set to be the first portable gaming console designed exclusively for online gaming and MMORPGs – and it’s from Panasonic!

Yup – The Jungle is going to be pulling the pig-tails of the likes of PSP and Nintendo DS – especially in the multiplayer playground.

The Jungle has more in common with a shrunken laptop with its QWERTY keyboard and a touchpad but then it adds a d-pad and shoulder buttons.

Don’t be expecting a slender device though – this appears to be the SAS version of a clamshell DVD player.

By all accounts the visuals on that tiny screen are quite brilliant but, let’s face it, if this machine is going to entice serious gamers out from behind their multi-display pizza box nests then it has to be more than good – it also has to be linked to a decent graphics card.

It should be able to squirt those visuals out through its HDMI port as well as having Wi-Fi. I don’t think I’d be asking too much to be expecting 3G/4G connectivity as well 😉

I was kinda expecting it to run PC games straight out of the box but it sounds as though Jungle runs a Linux OS. This would mean that games will have to be ported over.

There are a couple of games which have been announced for it: an MMO of BattleStar Galactica and a ‘badass’ online Machinima called Online Underground are said to be coming soon for the console.

I can see why this might work as there’s millions of MMORPG players that haven’t see natural light for years – but for the rest of us; is there a place for Jungle?

My iPhone 4’s graphics and gameplay is enough to give me a quick burst of geekahol when required and for something more punchy I have my gaming laptop.

But then there’s the iPad – that seems to be doing alright for itself.