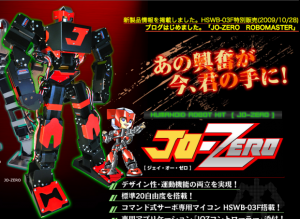 Little robots are just getting better – every week it seems!

From one that can attack its roomies with various weapons to the really cool 1.26M NIT ZMP collaberation.

But none of them can really be described as being nimble, agile or elegant can they?

Japan-based Himeji Softworks looks like they’re on the right track with their funky JO-ZERO robot kit.

Whilst its not going to convince you that it is in fact a human it can still manage a range of movement that is quite breathtaking.

The reason why this small venture’s droid is remarkable is that JO-ZEROâ€™s back is bendable like a humans (almost) which helps with the 30cm tall fella’s agility – that and the 20 joints in total (four in each arm, five in each leg and two in the back) and weighs just 800g.

He can even pick himself up after falling over, can get over obstacles and even crab under stuff.

You can program him by yourself (Nakamura-san, his inventor, says itâ€™s pretty easy) and remote-control him via infrared.

Check out the vid below – keep watching and it keeps getting better!