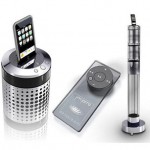 It’s has been a while since I’ve seen anything regardingÂ Jean-Michel Jarre – perhapsÂ ‘Destination Docklands’ was the last time.

This time it has nothing to do with his synth popÂ spectaculars asÂ it turns out that he’s a bit of aÂ gadget designerÂ too!Â He also happens to be a bit fussy bout the output from his iPod.

So he’s gone and designed the AeroSystem iPod speaker.

Typically understated (arf!) he’s knocked together quite an imposing metal and glass towerÂ that houses 2x 20W speakers and 45W subwoofer for blasting out that laser-synth music of his.Â  The remote is also a work of gadgety art in itself.

Of course it also charges your player and does have connectivity for other players – I’m guessing that these will require another stand/shelf.

450 Euros is the asking price and it is only availableÂ to rich French residents.