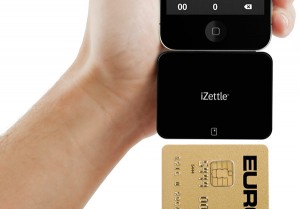 The Square iPhone credit card swiper is currently being sold in Apple stores and has recently been given the tumbs-up by Visa – but it doesn’t sit well with our chip and PIN security over here in Europe. Enter iZettle.

iZettle has a similar solution to the Square reader but aimed at Europe and will be launching in Sweden in June.

Not only does it enable you to accept credit card payments from friends or customers on the go the clever app adds a social twist.

When using the iZettle system there’s no swiping involved – you just need to hold the chip near the reader which plugs into the charge and sync port of the iPhone. The system will deposit the funds daily into the user’s account and the receipts can be sent to the people that pay via email or Facebook which then can be shared with your Friends!

The iZettle reader is larger than the Square at almost half the size of the iPhone. The reader is EMV approved and meets PCI-DSS regulations that govern credit card security in Sweden. Those regulations ensure that the traffic on the card network is encrypted

Please remember that, if you’ve bought a surprise gift or have ’embellished’ the tale of the amazing deal you got on that new TV or tablet could be spotted on your Facebook news feed 😉