ITRI – Smartphones Could Have TFT-EPD Next Year! 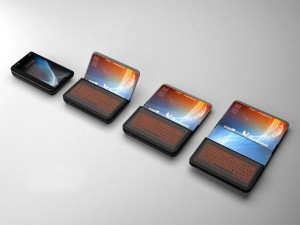 The Industrial Technology Research Institute (ITRI) of Taiwan has conjured up a flexible display that allows a smartphoneâ€™s screen to double to five inches.

This actually makes the screen size comparable to many netbooks and all-in-all a lot less bulky than the iCEPhone.

The demo device is branded the â€œNokia Communicatorâ€ and comprises an editing keyboard (lower half) and a wide format display (upper half). The user only would see the top half of the screen â€” the rest is hiding behind the keyboard and can be pulled out when required.

Looking at the pics it looks like the screen is separated down the middle but apparently that grey line marks the task border which can be shifted up and down the display as the user prefers.

ITRI has partnered with Pilot Fish to produce this demo model and is now seeking world-wide manufacturers to adopt the new technology which they say will be ready in a year.

Could we be seeing an iPhone with a screen that can be pulled out to three times itâ€™s original size in a year or so?