iTablet – Like an iPad but runs Windows, has USB ports, Flash, HDMI….. 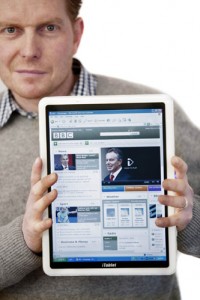 Whether you’re wowed by the iPad or not you can’t deny that it will sell – loads.

UK company, X2, can obviously see the potential as well as hearing what a lot of comments have cited as the iPad’s short-comings. They’ve even named it the iTablet!

In its own words “hot on the heels of Apple’s latest product launch“,X2 have launched the “iTablet” range of Windows and Linux-based tablet PCs.

X2 says “the iTablet will revolutionise the way that Windows users can access and use data on the move”.

It will connect to the web using Wi-Fi, though X2 has opted for the 802.11b/g standard, which is slower than the 802.11n standard used by the iPad. As with the Apple iPad, there is optional 3G connectivity too.

Robin Daunter, technical director of X2 Computing said: “The iTablet is extremely powerful with a vast array of features and data storage capacity and, what is more, it uses the well-received Microsoft Windows 7 operating system making it a more compelling proposition for users wishing to share data with their existing Windows-based systems and networks.”

There’s even a range of finishes including solid and metallic colours.

No word on pricing just yet but the iTablets should be hitting the streets in April.