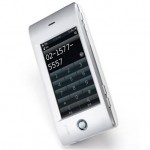 iRiver is a name that you’d generally associate with media players but they have been flashing their phone concept atÂ variousÂ shows.

I’m guessing that all the feedback was positive as it is a dream no more!Â

Wave hello to the iRiver Wave!

This Wave is a bit of a looker as well.Â  Check out thatÂ large touchscreen and that lovely, metallic case.Â Â

It’s fromÂ iRiver so media-playing is pretty much a given, with video streaming onÂ that large screen that flipsÂ from horizontal to vertical viewing……I’m sure something else does this…..Â

Wi-Fi and card expansionÂ is all very groovy but I would have expected digital TV as well – Am I being unreasonable?

The iRiver Wave is set forÂ launch in Korea in March 2009.