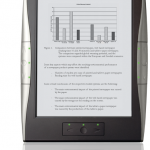 iRex currently offers the iLiad and iLiad Book Edition for regular folks but this new bad-boy is aimed at “business professionals”.

The iRex 1000 series is said to offer “superior functionality” and a 10.2-inch screen size for easy reading and referencing of documents from A4 Powerpoint presentations to PDF files and from HTML to TXT and JPEG.

Weighing less than 570 grams and 1.2cm deep the 1000 series is an open system which is said to synchronise easily with a PC via mini USB.

The display has 16 grey tones storage capacity is delivered via a changeable 1GB SD card while the built-in battery is claimed to have sufficient power to last for several days.

Three models will launch, the DR1000 base version, the DR1000 S equipped with a stylus and the DR1000 SW with stylus, plus Wi-Fi and Bluetooth connectivity due at a later stage.

Go and have a gawp at their site 🙂