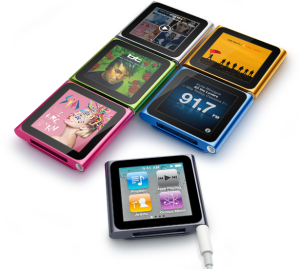 Appleâ€™s little iPod Nano has been given a major Jobsing today at Appleâ€™s â€˜Special Eventâ€™ at its headquarters today.

In order for the shrunken Nano to be usable to the sausage-fingered they’ve done away with the click wheel and replaced the controls with a rather neat looking multitouch loving screen – not a million miles away from this actually.

The Nanoâ€™s update has taken the previously small device in to the land of the Shuffle so much so that it gets its own Shuffle-esq clip so it can be slipped onto your collar, tie or bra-strap.

This is what Steve Jobs means when he gets a little crazy as he stated on stage â€œThis year weâ€™ve gone wildâ€.

That cool looking multitouch user interface can be orientated via two-finger rotation controls and there’s still room in that cute little body for a built in FM radio!

There’s nifty touches like the good and solid volume control buttons which are found along its brushed metal shell and the fact that the new Nano is available in six colours!

You get a choice of 8GB and 16GB flavours and you can pre-order them from today and they’ll start shipping next week priced atÂ Â£129 and Â£159 respectively.