iPod Nano 5G Pictured From a Source That Knows 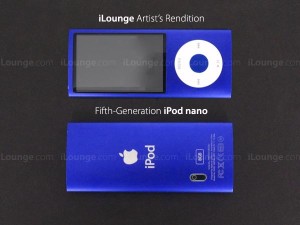 iLounge have already posted a picture of the iPod nano 5G – well a mock up anyhoo.

The next iPod nano wonâ€™t be out til later this year at the earliest but this pic is apparently a good idea of what the next version of the petite PMP will look like.

Latest tipsters have pointed at the possibility of the nano 5G packing a camera but iLounge has gone a step or two further.

This is all based on insider knowledge and if this source is right then the iPod nano 5G does will look like the current iPod nano 4G, but there a few important tweaks.

The main one must be that the the screen gets a wider aspect ratio, 1.5:1, so black bars are banished and movies will fill more of the tiny screen.

The camera will live round the back.

I was kinda expecting a touchscreen but if the tipster is on the up-and-up it looks like we’ll have a wheel for a while yet.

There’s not even a nod in the direction of a release date but looking back; the last two versions have appeared in August/September time.

That would be around the time all the hoo-har has died down after the new iPhone 3G has seen its release.