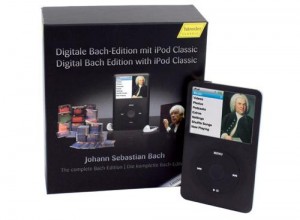 If you’re a huge fan of a certain JS Bach but the 172 CD set which was released to mark the 250th anniversary of the composers death was a little too expensive at its Â£1,000 price point; this may just be what you’ve been looking for.

The clue is in the name – this is an iPod Classic packed full of the work of J.S. Bach. More specifically 175 hours of the stuff; all pre-loaded in 128KB AAC format.

You get a 120 gig iPod Classic and the whole collection that originally retailed for a grand all for Â£499. The music is also contained on 3 back-up DVDs so if you ‘Pod does crap out at least you’ll still have your JSB safe. 🙂

And even with all those classics pre-loaded, there’s still 63GB of space free for your ABBA, Steelers Wheel, Strapping Young Lad and Carcas tracks.