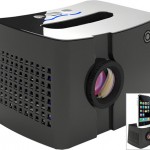 I love the screen on my iPhone.

It’s great for browsing and pretty sweet for films and stuff.

But, if you’re wanting to share the optical love it can get a little crowded.

While the 640Ã—480 image resolution is understandable, the ANSI brightness rating is a less-than-fantastic 10-15 lumens withÂ a contrast ratio of just 200:1.

That translates into aÂ projectedÂ image thatâ€™s roughly 15 to 27 inches in size but it’s not going to wow as far as definition is concerned.

There is also a mini AV jack allowing you to connect other devices as well as a set of 2W speakers for stereo sound.

No idea about release or cost as yet.