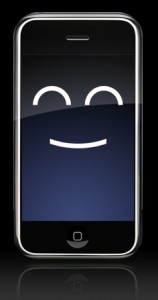 Now this is great news for us male iPhone owners.

Apparently, a survey that has been recently conducted has ‘proved’ that 54% of the 1,500 women who took part would be more likely to date a man if he owns an iPhone.

Now before all the tech-heads on the interwebs start cheering it appears that the female preference is more down to earning power rather than any appreciation of our sublime taste for elegantly designed gadgets.

One such lady put it that “if he has an iPhone then he’s obviously intelligent and well-off.”

37% of these quizzed females said that owning an iPhone makes a man seem more, get ready for this fellas – we all know what’s coming……….. reliable! This does mean that a second date would be likely though – personally I think that last bit was added as those women could obviously see the hurt in the male interviewers eyes 😉

“There’s just something about a man who’s good with computers that makes him more trustworthy,” said Lucy, a 23-year-old primary school teacher from London. “If he’s got the cash for an iPhone then he must be very good at his job, too,” she added.

Three quarters of the 2 million iPhones sold in the UK belong to males between the ages of 18 and 40 – most of these are probably being chased by seemingly shallow women! 😛